Researchers from Punjab University (PU) and the Post-Graduate Institute (PGI) of Medical Education and Research, Chandigarh, in India produced a comic book to help explain children the coronavirus pandemic and how to stay safe through simple precautionary steps. The comic book was released on March 9 by the government of India.

In addition to developing materials for training medical professionals on public health impacts of air pollution under Health Care Without Harm's Climate and Health Air Monitoring Project (CHAMP) the PGI/PU team has also been dabbling with ideas that would reach the message of air pollution and health to the masses. The team led by Dr. Ravindra Khaiwal (School of Public Health, PGI) and Dr. Suman Mor (Department of Environmental Studies, PU) zeroed in on children between the age groups of 6 - 14 years based on discussions with their children aged 8 and 14 and the CHAMP team members. 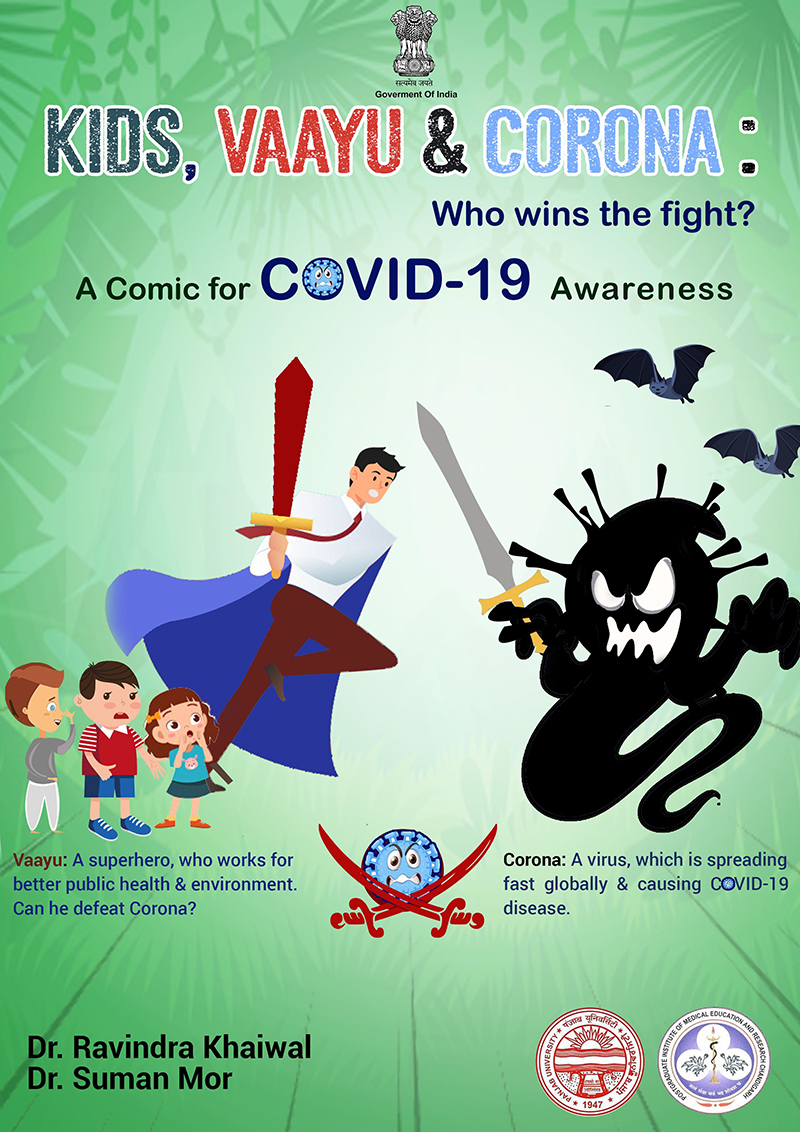 The idea of the comic book shaped up over dinner time – the superhero Vaayu (Sanskrit for wind) would play the protagonist while Smokey the antagonist. Vaayu was to be accompanied by Megha (rain bearing clouds) and Surya (the sun). The message of air pollution and health would be delivered with the help of human characters  - Doctor Aunty - on health; Chatur Nani (clever grandma) - on biomass and indoor air pollution; and Kisan Kaka (farmer uncle) - on crop burning.

The task of developing the appearance of the characters was taken up by 8 year old Aditya and 14 year old Lakshya.

From air pollution to COVID

The English and Hindi version of the comic book was produced in less than 5 days and was vetted by the National Center for Disease Control (NCDC) and Ministry of Health and Family Welfare (MoHFW), Government of India. The MoHFW has endorsed the book and decided to have it translated in all Indian languages for larger reach.

The book has become very popular because of the simple format, easy to understand text and its characters. The Central Board for Secondary Education (CBSE) has put up the book on its website and is sending copies to schools around the country. CBSE is a division of the Ministry of Human Resource Development, Government of India, and is one of the nodal bodies in India for school education. There are about 21,500 schools under CBSE in India.

There are requests from individuals, doctors and public health experts from countries like China, Japan, Canada, Malaysia, Czech Republic, Greece, and Indonesia to adapt the book in their respective languages.

Makers of a popular animated television series – Chhota Bheem – have reached out to the PGI/PU team to adapt the comic book in their show. Chhota Bheem is considered as India's largest children's entertainment brand. It is highly successful among younger children due to its relatable characters and vernacular nature. The show has viewership of 40 million in India and beyond.

Permissions have also been given to Google Bolo, which is a learn to read app for ages 6-11 years, to adapt the content for worldwide circulation. Google Bolo is a free app for the Indian market; it is Google's way of using its capabilities in artificial intelligence and machine learning to create meaningful social impact.

The Climate and Health Air Monitoring Project in Chandigarh is generously supported by the Association for India's Development.