News posted by nknock@hcwh.org on November 9, 2018

Mobilising industry and individuals to act with urgency on climate change has never been easy, but when it comes to the healthcare sector, which is responsible for 10% of America’s total greenhouse gas emissions, that appears to be changing.

Healthcare companies and professionals played a big role at the Global Climate Action Summit held in San Francisco in September. And that is because the worse the impacts of climate change, the more attention is being focused on healthcare as a leading solution.

By making climate change fundamentally about people’s lives, their children’s health and their communities’ wellbeing, leading healthcare actors have engaged companies and entire health systems, and are starting to move the needle.

“We believe that we can make a difference in the climate and help others to deal with the effects of climate change,” Bernard J Tyson, chairman and CEO of the healthcare giant Kaiser Permanente, told attendees at the summit while announcing his company’s ambitious goal to become carbon-neutral by 2020. It’s a target Kaiser is already 30% on its way to achieving.

The US healthcare sector emitted 655 million metric tons of carbon dioxide in 2011,according to The Commonwealth Fund, with associated impacts on air pollution and the 200,000 premature deaths attributable to air pollution annually.

The effort to decarbonise the healthcare supply chain is now gathering steam in America and worldwide. Last November, at the COP23 climate negotiations in Bonn, more than 20 hospitals and healthcare systems convened the European Healthcare Climate Council (EHCC) to strengthen the sector’s commitment to reducing its contribution to climate change. Mirroring the approach in America, the group aims to reduce its carbon footprint through smarter product and pharmaceutical procurements, more sustainable food sourcing, improved packaging and cleaner forms of transportation. 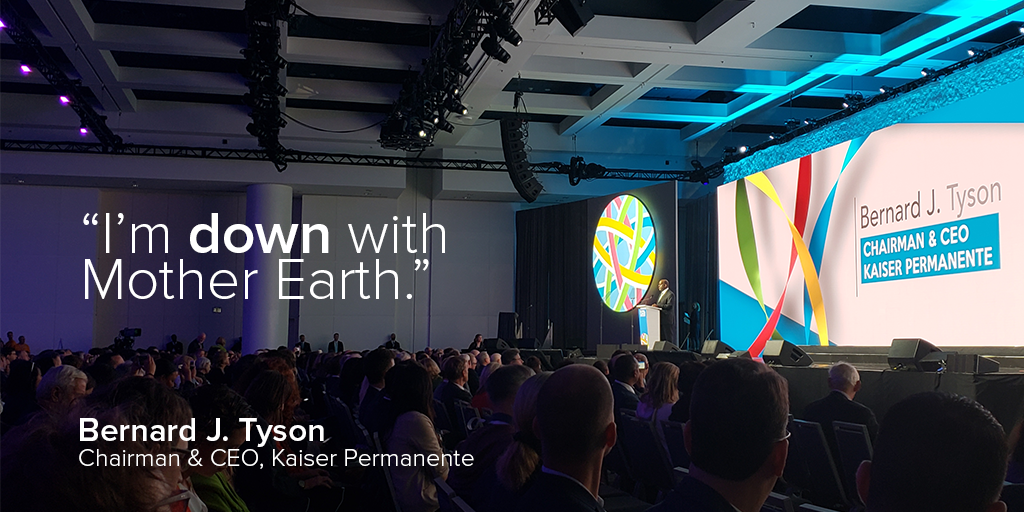 The strategy, which is based on a World Bank framework called Climate-smart healthcare, also seeks to build resilience into the healthcare infrastructure so that medical facilities are better prepared to respond to extreme weather events.

So far, health institutions in 37 countries representing more than 10,000 hospitals and health centres have signed the Health Care Call to Action on Climate Change, an invitation from EHCC members to governments and the healthcare sector globally to join it in reducing climate impacts.

In the US, action taken by the healthcare industry has been even more robust. This is in part due to the work of Health Care Without Harm (HCWH), an organisation founded in 1996 in response to the Environmental Protection Agency’s announcement that the sector, which then operated thousands of medical waste incinerators, had become one of the largest dioxin emitters, releasing toxic mercury into the air and water from broken thermometers.

“We thought, how are we ever going to turn the economy around to support healthy people and a healthy planet if the very sector committed to healing is a major polluter,” Gary Cohen, the president and co-founder of Health Care Without Harm and Practice Greenhealth, told Ethical Corporation in an interview.

Within a decade, Cohen’s organisation worked alongside environmental groups to close all but 70 of the country’s 4,500 incinerators and eliminated the market for mercury measuring devices by pushing the healthcare industry to develop alternatives.

“Through that effort we woke the healthcare sector up to its own environmental responsibility, [showing them] it was better for the environment, it reduced their environmental footprint dramatically, and saved them money.”

HCWH has since become a global leader in helping to green the healthcare industry: from streamlining the distribution of goods to using fewer and cleaner plastics, reducing toxic chemicals in buildings and improving waste disposal practices.

At the San Francisco climate summit, the organisation led healthcare industry heavyweights as part of the We Are Still In coalition, showing solidarity with the goals of the Paris treaty and demonstrating the healthcare sector’s leadership in addressing its climate footprint while accelerating the transition to a renewable energy economy. 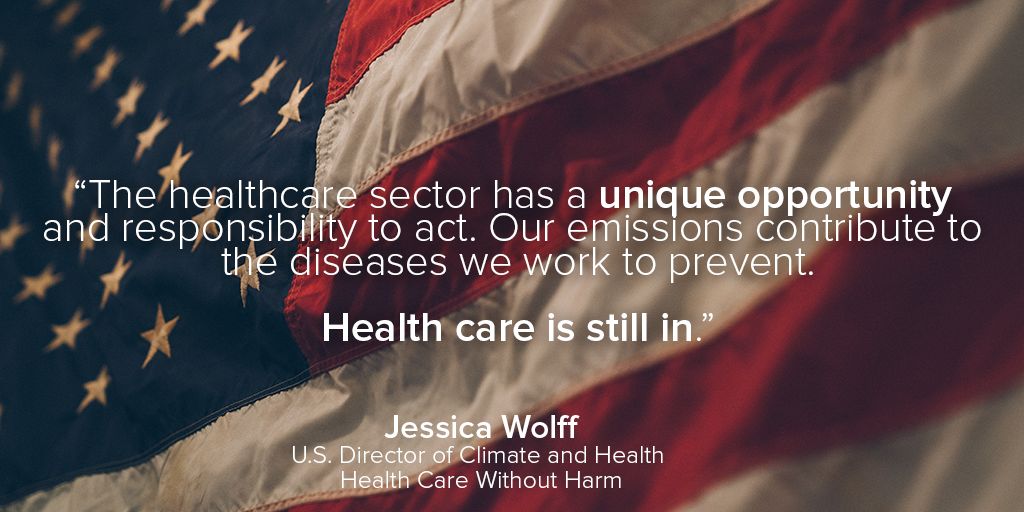 “We need to change the narrative and mobilise this whole sector to address the climate crisis because that is the defining issue of our time,” said Cohen. Seven million people die annually from air pollution and the burning of fossil fuels, more than AIDS, malaria and tuberculosis combined.

But whereas billions of dollars are spent fighting those infectious diseases, he said, almost none is spent curbing air pollution. The way to engage the public on climate change is to focus on air pollution from the burning of fossil fuels, he added, and to connect the issue directly to people’s health.

“It’s fundamentally a health issue. Our job is to help build global consensus for the healthcare sector that they need to lead by example: to drive toward renewable energy, detoxing their supply chain, supporting sustainable agriculture. We have to kick our addiction to fossil fuels. That is the most important health intervention that can happen on the planet.”

At Kaiser, headquartered in Oakland, California, substantial efforts are under way to green the company’s supply chain and business practices. Kathy Gerwig, Kaiser’s environmental stewardship officer and author of the book “Greening Health Care: How Hospitals Can Heal the Planet,” agrees that what resonates most is tying the climate crisis directly to individuals and their community’s wellbeing.

“People care about their health and they care about children’s health, and it turns out that air pollution is a key driver in getting people interested in taking action,” said Gerwig. “Whatever you think about climate change, many of the actions taken to reduce greenhouse gases reduce air pollution, and that saves lives. Through our supply chains, through our built environment, we can have an impact across the entire economy so it’s not just a healthcare sector improvement, but [something] much broader.”

Under Gerwig’s watch, Kaiser has reduced its meat purchasing costs by 18%, with a goal of buying 100% sustainably grown or locally sourced food by 2025. In the San Francisco East Bay city of Richmond, long considered a food “desert” because of its lack of options for buying healthy fresh food, Kaiser is now helping to create a food processing co-op that will create local jobs and encourage more sustainable produce grown in the community.

The company successfully fought to eliminate chemical flame retardants in its furniture, helping to reshape the furniture industry in the process. Kaiser also had an impact on the examination glove industry by shifting purchasing away from gloves made with polyvinyl chloride, which contributed to dioxin pollution, and buying, durable and environmentally safe Nitrile gloves instead.

Recently, the company committed to spending $200m to fight homelessness and expand affordable housing as a dual way to address the health and climate crises. Kaiser has also turned to more resilient, chemical-free hard flooring in its hospitals, a trend that has driven the industry.

“With flooring and carpeting there are now many healthier options that are affordable because we took a long-term view in helping that supply chain evolve to products that are healthier,” said Gerwig. “From a supply chain standpoint, that’s the kind of impact we can have when we lead from a perspective of health and leverage our purchasing power and the power of the healthcare sector.”

Hospitals are often the largest employers in their cities, and even in their states. In the UK, carbon accounting by the National Health Service showed that 15% of the health sector’s emissions come from buildings, 13% from transport, and a whopping 72% from procurements. The largest employer in Britain’s public sector, the NHS currently has a £126bn operating budget and is the largest CO2 emitter in the health sector, representing nearly two-fifths of all UK healthcare emissions.

But greening the healthcare supply chain doesn’t mean only reducing the industry’s carbon footprint in developed nations such as the UK and US. It also means increasing access to healthcare in the developing world, particularly in rural settings.

Energy insecurity remains one of the roadblocks to providing adequate care in the developing world, since clinics that lack reliable electricity can’t operate equipment or keep medicines cold.

Therefore, building decentralised, off-grid and low-grid energy systems is another strategy many medical professionals have embraced. “We can leapfrog over diesel, leapfrog over fossil fuels, so that if we solarise clinics all over the world we’re improving healthcare access and guaranteeing more reliable care,” said Cohen.

“We’re not just talking about abstractions in gigatons; we’re talking about lives saved, less dengue fever [a mosquito-borne virus], and all of the health impacts that are addressed.”

The United Nations Development Programme, along with HCWH, is now working in 10 countries, from Central America to Eastern Europe, Africa and Southeast Asia, on a Sustainable Health in Procurement Project to tackle carbon reductions in manufacturing, improve disposal of medical products, and reduce toxic chemicals. The project will soon move to China, India, Brazil and South Africa.

Health leaders now want to get the UN climate treaty process involved so that healthcare systems are required to report on their progress reducing carbon, building resilience and embedding those health benefits into the reporting on climate change.

In the US specifically, nurses and doctors are stepping up in the fight, such as the Alliance of Nurses for Healthy Environments and the Medical Society Consortium on Climate Change and Health, which includes half the doctors in America. With the healthcare sector annually spending more than $100bn on chemical products alone, putting added pressure on medical supply companies such as Philips, Johnson & Johnson and Becton Dickinson to commit to a low carbon, toxic-free supply chain could have wide-reaching impacts.

“If you can insert equity and sustainability into this sector, which is 18% of the economy, it could have a major effect,” added Cohen. “There’s a big awakening happening. We need to accelerate, but we’re making progress.”