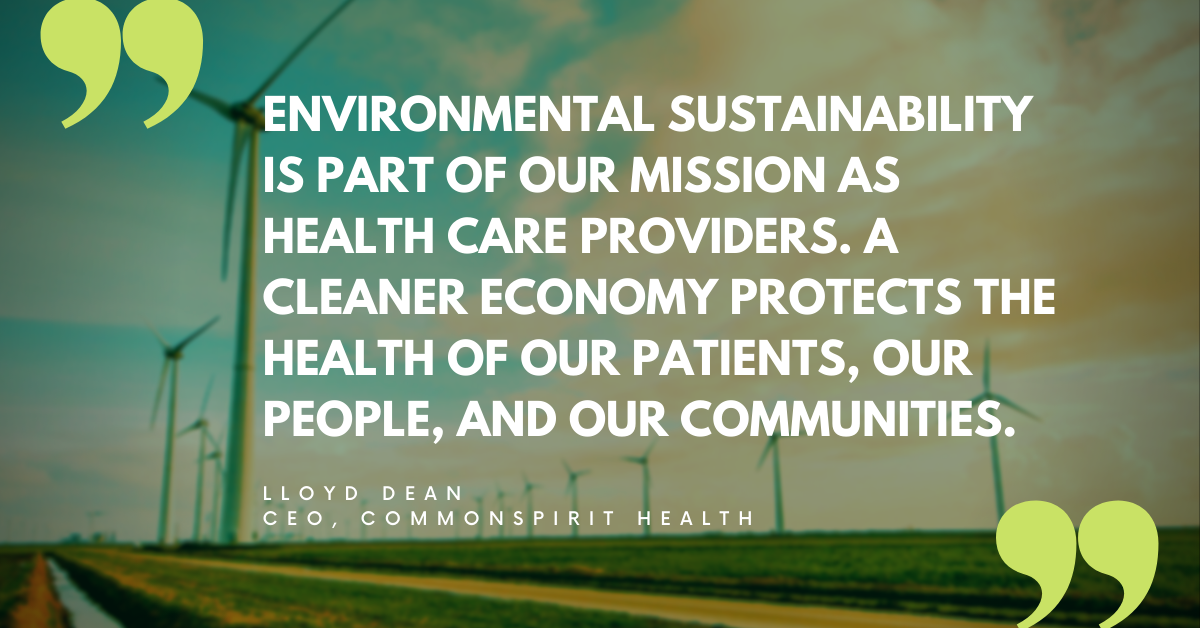 After decades of leadership advocating for climate policy, CommonSpirit Health’s CEO Lloyd Dean is now one of four leaders of the new American Is All In coalition – the result of We Are Still In joining with America’s Pledge to continue the cross-sectoral, subnational commitment to transformational climate action. Dean joins Mike Bloomberg, U.N. secretary-general’s special envoy for climate ambition and solutions, Jay Inslee, governor of Washington, and Vi Lyles, mayor of Charlotte, North Carolina. America Is All In launched on the day the United States rejoined the Paris Agreement under President Biden.

At the official launch event with White House national climate adviser Gina McCarthy and U.S. special presidential envoy for climate John Kerry, Dean and the other leaders talked about the Biden administration’s interest in working with U.S. subnational leaders and non-federal actors as they develop their strategy to tackle the climate crisis.

“CommonSpirit Health’s deep commitment to a healthier future includes protecting our environment, because there is an unbreakable connection between people and the planet. Climate change not only affects the air we breathe, the food we eat, and the water we drink, it contributes to a long list of health-related issues, from trauma and emergencies, to mental health, allergies, respiratory illness, and infectious diseases. Environmental sustainability is part of our mission as health care providers. A cleaner economy protects the health of our patients, our people, and our communities,” Dean said. Read more about CommonSpirit’s commitment to Protecting Our Environment for a Healthier Future.

The new coalition’s goal is to cut U.S. emissions in half by 2030 (below 2005 levels) and reach net zero emissions by 2050 while guarding against the impacts of climate disruption. Health Care Without Harm has been a strategic partner representing health care in this subnational and non-federal actor movement, which was previously committed to upholding the United States’ Paris Agreement climate goals after the Trump administration pulled out in 2017.

In just the first few months since the inauguration, the climate action landscape has changed dramatically with the new Biden-Harris administration committing to ambitious action to address the climate crisis in a whole-of-government approach, using all of their executive authority to move forward to cut pollution, end environmental injustice, and invest in clean energy.

America Is All In is mobilizing thousands of U.S. cities, states, tribal nations, health care systems, businesses, schools, faith-based communities, and cultural institutions to work with the federal government to bolster U.S. climate goals. With Dean’s appointment as an America Is All In leader, it is clear that the health impacts of climate change, and health care climate action, are more important than ever. We urge your health system to join the America Is All In Climate Declaration alongside CommonSpirit Health and other U.S. leaders to address the largest public health threat of the 21st century. With a healing mission and a commitment to “do no harm,” health care has a unique responsibility to act now.