The health care sector can increase access to healthy, fresh foods while addressing the social and environmental determinants of health in their communities, by creating jobs and contributing to a strong and equitable food economy. 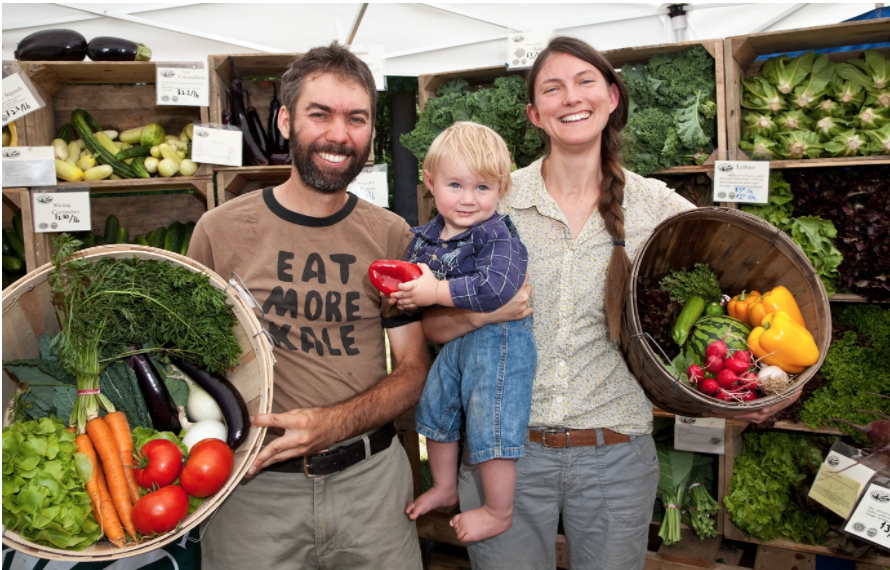 Red Fire Farm, an organic farm in Massachusettes and member of the Faces of New England cohort, a farm-to-institution initiative (Red Fire Farm).

Local food has become a priority for individuals and institutions across the country. From 2006 to 2014 the number of farmers markets increased by 180 percent, sales to food hubs (local food aggregators) increased by 288 percent, and farm-to-school programs increased by 430 percent. Local food sales in the United States were estimated to be $8.7 billion in 2015.

Over the past 50 years, food and agribusiness companies have prioritized efficiency in food production, processing, storage, and distribution. Diversified farms growing multiple food items have given way to specialization, and fewer and fewer companies are producing, processing, and distributing our food. This consolidation is also seen geographically, with particular states or regions producing the bulk of what we eat, and other states and regions producing very little.

The consolidation of the food system has lead to:

Defining local
The concept of local food can vary based on an organization’s or individual’s perspective. Health Care Without Harm and Practice Greenheath define “local" as food produced and processed within 250 miles of the health care facility.

Compounding this trend, diet-related diseases have become the leading causes of death in the United States, disproportionately impacting low-income and minority communities. While we produce an abundance of food, a great deal of it is highly processed which is counter to dietary guidance from the Department of Agriculture and contributes to poor health outcomes.

In 2017, Health Care Without Harm and Practice Greenhealth found that 82 percent of health care survey respondents spent, on average, 15 percent of their budgets on local foods, using a variety of supply chain pathways. 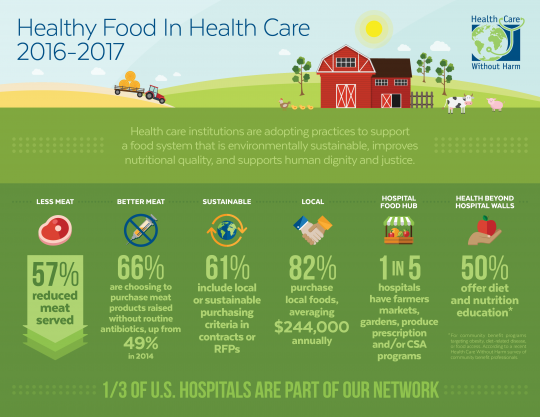 This is consistent with findings from Becker’s Hospital Review which states, “While some [hospitals] are even setting up gardens to grow their own produce, others are buying locally grown products because they tend to be fresher, more nutritious, and boost the local economy.”

Health care facilities have an opportunity to amplify their healing mission and leverage multiple benefits when choosing to buy local and regional food.

Employee and patient health and satisfaction

“With just 1 in 10 adults meeting the federal fruit or vegetable recommendations, better tasting fruits and vegetables can encourage increased consumption, thereby reducing the risk of many leading causes of illness and death, including heart disease, type 2 diabetes, some cancers, and obesity.”

— Centers for Disease Control and Prevention

Produce picked at peak ripeness tastes better and may be more nutritious. Food that is harvested in anticipation of a long transport is often picked underripe, reducing its nutritional value and compromising taste.

The longer a food spends off the vine, the greater the loss of vitamins, minerals, and other nutrients.

Foods consumed in the United States can spend anywhere from two days to multiple weeks in transport depending on the point of origin.

In a local food system, the supply chain and distance traveled is shortened, which enables foods to be picked riper and consumed closer to harvest. This provides the consumer with better tasting foods at their peak of nutritional value.

People are increasingly interested in knowing where their food comes from and prefer local foods. Surveys show 87 percent of grocery shoppers say the availability of local food is either “very” or “somewhat” important in choosing a primary grocery store, and two-thirds of respondents said they choose a restaurant based on local food options.

Consistently listed as a “hot trend” by the American Restaurant Association and as health care food service trend, this preference is not limited to “high-end” establishments but is reported among casual, fast-casual, and quick-service dining as well.

This broad interest across food establishments demonstrates that local food is not a priority of a select group, but relevant to the population at large. Further, many report that when given a choice, they would select menu items featuring local ingredients at a slight price premium.

This preference for local foods is reflected in Press Ganey score improvements among hospitals that have increased their service and marketing of local foods.

Cooking with fresh local ingredients also improves food service employee satisfaction due to the skills they learn and the sense of fulfillment they gain from serving food aligned with the hospital's mission. For employees at Mercy Medical in Iowa, allocating the extra labor required to cook with fresh ingredients was challenging at first, but after seeing the reaction from the individuals they served, employees felt “proud of what they were producing.”

Addressing the root causes of health

Social factors, including education, income, and poverty, accounted for over a third of total deaths in the United States in a year. When hospitals buy local they address these social and environmental determinants of health by creating jobs and building community wealth.

In addition to jobs in agriculture, buying local supports related businesses like processors, aggregators, distributors, cold-storage facilities, and equipment manufacturers – all of which provide additional jobs. A review of five different foods sold locally versus the national market found that farmers earned 50 to 649 percent more for their products due to a shortened supply chain and that nearly all of the wage and proprietor income remained in the local economy. 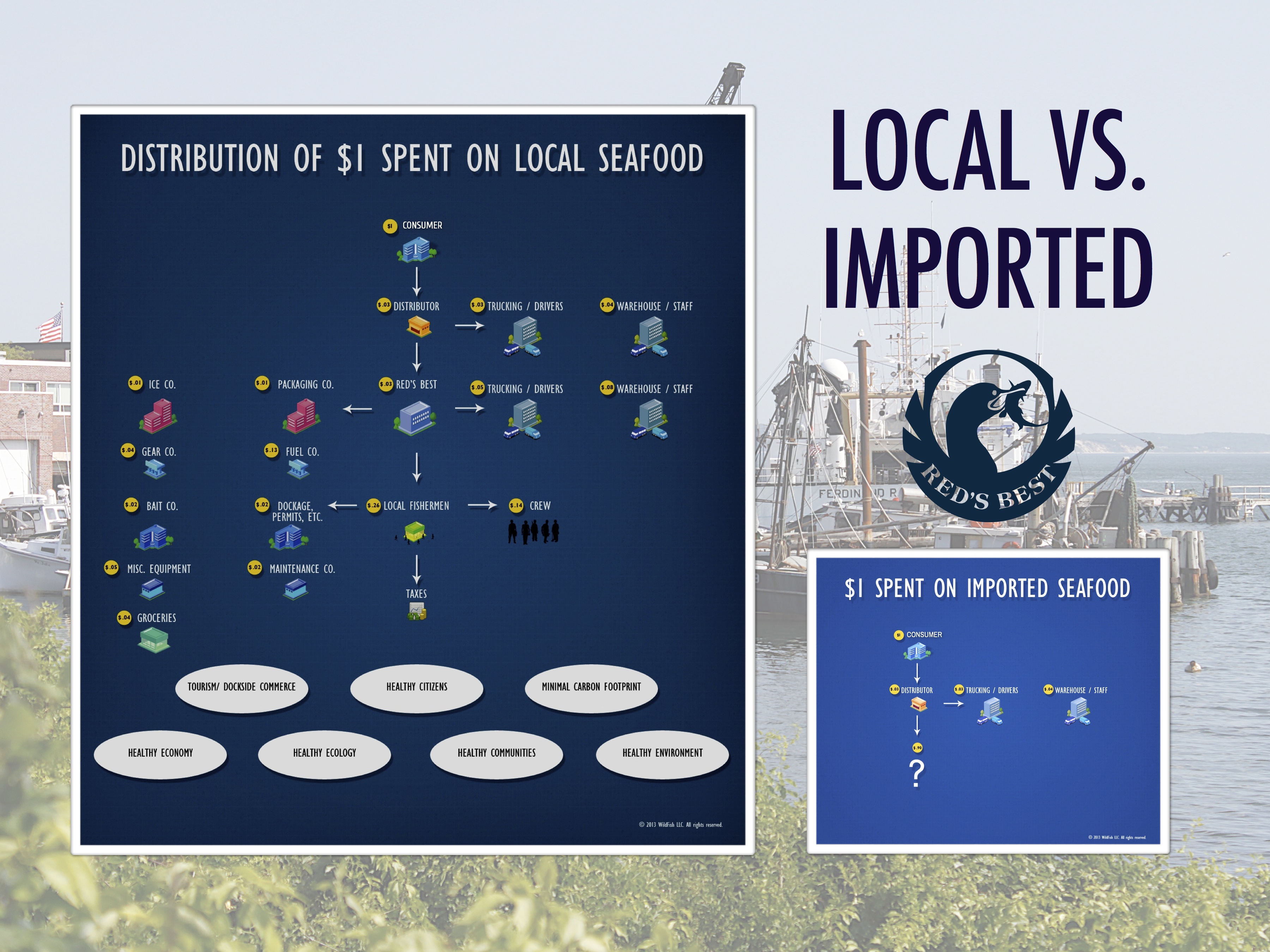 Examples from Georgia and Ohio illustrate the power of local foods in community development.

The University of Vermont’s Center for Rural Development examined the effect of the University of Vermont Medical Center’s local purchasing on the economy. In 2012, the Practice Greenhealth member hospital spent $1.78 million on local food, resulting in a total economic output ranging between $3.53 million and $4.71 million, creating 24 to 30 jobs. The hospital’s purchasing had an economic multiplier ranging from 1.98 to 2.64, meaning that for every dollar spent on local food by the hospital an additional $0.98-1.64 was added to the local economy.

When hospitals invest in local food systems they can provide opportunities for populations that have historically been excluded, and subsequently address the social and environmental determinants of health.

In two separate reports, the USDA and the St. Louis Federal Reserve Bank both found that investment in local food systems can combat structural inequalities and increase food equity.

Many organizations addressing food inequity are looking beyond the charitable feeding model and are utilizing local food markets to provide job training and education and to develop pathways for underserved communities to build and acquire capital resources.

Local food markets can be easier to access in comparison to national or international which require greater capital investment. When health care invests in local food systems they can provide opportunities for populations that have historically been excluded, and subsequently address the social and environmental determinants of health.

Increasing equity through employment
Boston Children’s Hospital, a Practice Greenhealth member, supports minority communities through their purchasing relationship with CommonWealth Kitchen, a community development corporation based in Boston. CommonWealth provides kitchen space to over 50 food businesses, 75 percent of which are owned by women and immigrants, many of whom are people of color, who employ nearly 150 people in one of Boston's lowest-income neighborhoods.​ Each year, three to five of these companies "graduate" into their own dedicated retail or production space. Since their inception in 2009, CommonWealth has "graduated" over 50 companies that are still in business today, creating more than 500 jobs.

5) Protects farmland and the environment

According to American Farmland Trust, over 40 acres of farmland are lost each hour in the United States due to urban sprawl. Further, 91 percent of fruits and 77 percent of vegetables are grown on “urban edge” farms that are under threat of development. Pressure to develop farmland is strong as property values rise, particularly lands in relatively close proximity to metropolitan areas, because development brings higher revenues than farming.

However, well-managed farmland provides services to the community that are not captured in an analysis based solely on revenue from the land.

Farms growing for local markets often maintain genetic diversity because they grow a wider variety of crops than farms growing for national markets, which grow for standardization and a long route to the plate.

New York City recognizes the role of sustainably managed farms in protecting water resources for its residents. The Watershed Agricultural Council works with farmers and foresters to implement environmentally sustainable practices and to conserve working lands in order to provide clean drinking water to more than 9.5 million New Yorkers every day. Since its inception in 2001, the council’s Agricultural Conservation Easement program has protected 25,845 acres of farmland in the watersheds that surround New York City’s reservoirs in the Catskills.

The supply chains to population centers are getting longer with fewer goods and fuel on hand locally, leaving hospitals and communities vulnerable to interruptions during natural disasters, bacterial outbreaks, and other emergencies.

In successful regionally based food systems of the past, food was grown in surrounding rural areas and processed and warehoused in cities. Cities often had weeks of food on hand.

While the move toward consolidation in the food system has lowered prices and increased profits for food companies, it has made our system more vulnerable to events such as a bacterial outbreak, livestock or poultry disease, and extreme weather events.

A 2017 Johns Hopkins Center for a Livable Future report on the City of Baltimore’s food system resilience found that the geographic concentration of food processing and food distribution/warehouses, and the specialization in crop production could compromise their ability to access food in a crisis. The report recommended balancing their reliance on national and global food markets with local and regional food systems.

Health care can play an important role in building food system diversity and resiliency and ensuring a reliable food supply for their communities by supporting local and regional food producers.

The Healthy Here Mobile Farmers Market is a market on wheels that sells produce from the Agri-Cultura farmers cooperative, traveling to clinics, schools, and community centers in Albuquerque’s areas of highest need (Healthy Here PR at CW Communications).

By purchasing regionally grown foods from sustainably managed farms, health care has access to a wider variety of tastier, fresh foods that can be enjoyed seasonally and at their peak of nutritional value.

Health care can take action now to provide healthier food to patients and staff, while preserving farmland, protecting our environment, and ensuring a reliable food supply.

Contact a Healthy Food in Health Care representative in your region for more information and assistance in meeting your food goals, and join Practice Greenhealth for individualized technical assistance and national recognition for your work in supporting the local food system.