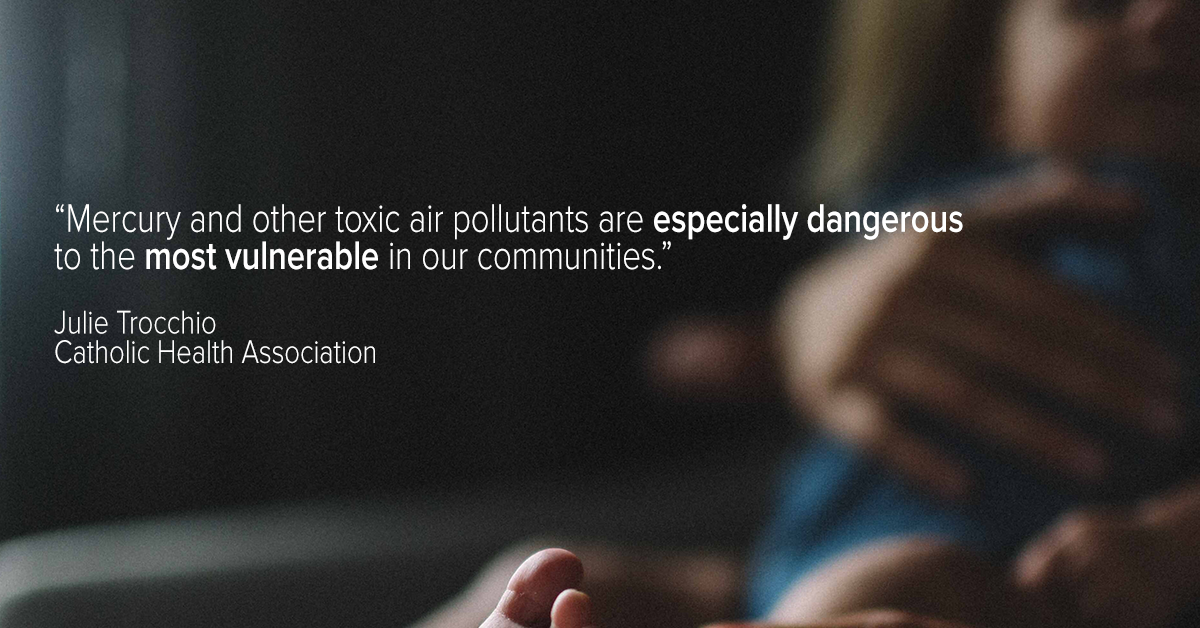 In December, the EPA announced that it will reconsider the reasoning behind the Mercury and Air Toxics Standards (MATS), arguing that the regulations are no longer “appropriate and necessary.” This proposal could undermine the standards, prevent future protections from mercury and air toxics, and have far-reaching implications for how the EPA assesses the public health impact of environmental rules.

“Hospitals have tremendous moral credibility on this issue,” said Gary Cohen, president and co-founder of Health Care Without Harm, the organization that led the campaign for mercury-free health care. “Twenty years ago hospitals recognized their responsibility to protect their patients from this highly toxic pollution. Now they are urging the EPA to uphold its responsibility to protect the health of all Americans by maintaining strong limits on mercury and other toxic pollution from coal-fired power plants.”

In their letter to Wheeler, the health systems point to the health benefits of the standards for their patients and communities and emphasize the vital importance of maintaining the standards to protect the public from mercury and other forms of air pollution. When the EPA adopted the rule, they estimated it would prevent up to 11,000 premature deaths each year and prevent 4,700 heart attacks, 130,000 asthma attacks, and 5,700 hospital and emergency room visits annually.

“The collective benefits of reducing these toxins have been shown to help families and children every day,” said Sumita Khatri, MD, Cleveland Clinic Asthma Center co-director. “Physicians and healthcare providers are aware of the impacts on cardiopulmonary and neurologic health that are not only immediately affecting children and adults, but also pose long-term harm due to chronic exposures. Our ability to control these factors in the environment should be upheld for the betterment of our most important asset: the health of our citizens.”

The letter also highlights the billions of dollars in avoided costs associated with health benefits due to the highly successful Mercury and Air Toxics Standards, reducing health care costs for families and hospitals.

“Mercury and other toxic air pollutants are especially dangerous to the most vulnerable in our communities: unborn babies, developing children, people who live in poverty. Cutting back on the current standards will have dire consequences for these populations – and all of us.”
– Julie Trocchio, Catholic Health Association Community Benefit and Continuing Care senior director

“We are committed to a healing mission and know that cleaner air means healthier people and a healthier planet. We are doing our part to clear the air of toxic pollutants like mercury in the communities we serve. We were among the first health systems in the nation to eliminate the use of mercury because we know well its devastating effects – lifelong neurological damage, for one. We join other hospitals and health systems around the country in asking the EPA to uphold standards that help keep our communities healthy.”
– Sister Mary Ellen Leciejewski, Dignity Health vice president of corporate responsibility,

“Mercury’s well-known impacts on neurologic development, premature birth, and cardiovascular disease makes it a pollutant which, if not controlled, will negatively impact all members of our society. Mercury and air toxic standards are essential to reducing mercury in the environment, and particularly prevent long-term accumulation of mercury throughout ecosystems – including our marine food supply.”
– Jeffrey A.  Gold, M.D., OHSU School of Medicine professor of medicine and Pulmonary and Critical Care Division interim chief

“The proposal to weaken the important public health protections in the Mercury and Air Toxics Standards goes against everything we stand for at Virginia Mason Health System. We depend on EPA’s leaders to put the health of our communities first. Please don’t prioritize the economic interests of polluters over the well-being of our patients, family members, and neighbors. Keep the existing Mercury and Air Toxics Standards in place.”
– Gary S. Kaplan, M.D., Virginia Mason Health System chairman and CEO