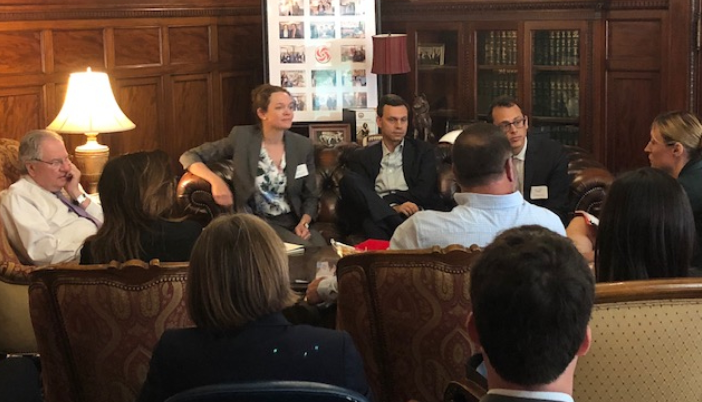 It was a successful day of talking about climate change and health among policymakers and government officials last month.

Lawmaker Education Day – a series of meetings and conversations with legislative leadership in Massachusetts on July 11 – gave a platform to dozens of businesses, health care professionals, and sustainability leaders to voice their concerns about climate change while sharing thoughts on how to address climate change issues through policy.

Lawmaker Education Day, which was held at the Massachusetts State House, was co-organized by Ceres, the ELM Corporate Council, the Alliance for Business Leadership, Health Care Without Harm, and Second Nature.

Business leaders and health care institutions shared their sustainability stories with lawmakers as they considered legislation that would accelerate the transition to clean energy in the Commonwealth. Group meetings were scheduled throughout the day with key legislative leadership and a diverse group of corporate partners and health care institutions.

Ravanesi joined other advocates in a one-hour meeting with Speaker of the Massachusetts House Robert DeLeo. The group was able to provide stories of hospital sustainability successes. Speaker DeLeo was very interested in the role and perspective of health care throughout the conversation.

“The day was very successful, it started off with a very productive discussion in the Speaker’s chamber,” Ravanesi said.

The state of Massachusetts has about a $44 million budget, and Ravanesi explained that 43 percent of the state’s budget is allocated toward health care.

“Clearly, the speaker is interested in the largest cohort spending half of the entire state budget, which is health care,” he said.

Ravanesi said the group next met with Senator Cynthia Stone Creem, who is the current senate majority leader. Again, Ravanesi said the group shared sustainability success stories and policy priorities. The group also thanked Senator Creem for her support of a bill that aims to help Massachusetts reach net zero carbon emissions by 2050.

Clean air was a hot topic of conversation throughout Lawmaker Education Day in Massachusetts this year.

Massachusetts is the largest employer state in the country. This means that there are almost half a million employees across the state, and thousands of miles traveled by vehicles every day.

Ravanesi added that there are also talks of carbon fees, which would put a price of $20 for every ton of carbon used. This would put an approximate $0.25 fee on oil and gasoline purchases in the state of Massachusetts. The carbon fee is probably one of the best ways we can get to achieving our reduction in greenhouse gas across the different sectors,” he said.

The voice of health care

Alex Rabin, an attending physician in the division of pulmonary, critical care, and sleep medicine, and an assistant professor of medicine at Tufts University School of Medicine, said he was invited by Ravanesi to attend Lawmaker Education Day. Rabin became invested in climate change and health advocacy more than two years ago.

“I was there as a member of the health care community to inform and educate lawmakers about the importance that climate change will play in the health of our patients,” Rabin said.

In the series of talks last month, Rabin said he highlighted the growing number of cases of asthma, including worsening cases for people with lung disease and young children. He also touched on the danger of increasing temperatures, especially with older patients who are often admitted into urgent care as a result of extreme heat.

“I would frame this as a public health crisis and not only an environmental crisis,” he said. “It’s going to affect the well-being of us and our children.”

Rabin also addressed how the health care sector is a “big part of the problem” when it comes to climate change because health care facilities use a significant amount of energy and produce large quantities of waste.

“The exciting part to talk about was the role of Boston hospitals. We are leading the way on procuring clean energy, while trying to clean up our facilities and reduce our carbon footprint,” he said.