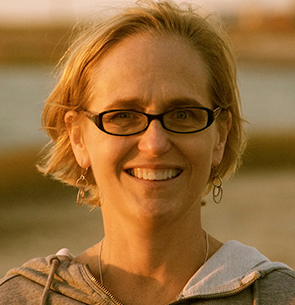 Dr. Amy Collins first became inspired to act on climate change more than a decade ago when her fourth-grade son reprimanded her for idling their car in the pick-up line at his school. He had learned about climate change from his teacher and wanted the family to work together to reduce their carbon footprint. Later that day, the family watched “An Inconvenient Truth” and decided right away to implement changes at home.

After this “aha moment” sparked by her son, Collins became increasingly aware of the environmental impacts in her workplace.

Collins did some research, discovered Health Care Without Harm, and quickly learned not only that it wasn't illegal, but that there were many other opportunities for hospitals to reduce their environmental impact. After writing a letter to her administrators, Collins was granted permission to start a recycling program and a sustainability team, and so began her second career path.

“I recall feeling ill that I had not done enough to protect my asthmatic son from environmental threats and vowed to do more in the future to protect him and my patients,” Collins says.

Her newfound knowledge and passion drove her sustainability work at MetroWest where the “Go Green Team” educated, empowered, and inspired employees to implement sustainability programming. Between 2007 and 2013, under the leadership of Collins, MetroWest won many Environmental Excellence Awards from Practice Greenhealth, including the Environmental Leadership Circle Award for two years.

Using the knowledge and experience she acquired at MetroWest, Collins has worked to inspire and equip other health professionals and hospitals to adopt new programs and practices that are in line with the oath to “first, do no harm.” For three years, she worked with Vanguard Health System as a consultant, leading the implementation of sustainability programs in Vanguard's hospitals nationwide.

Today, in addition to working as an emergency physician, Collins leads Health Care Without Harm’s Physician Network, where she has the opportunity to mentor and support both new and experienced sustainability leaders committed to climate-smart health care.

“Many medical associations recognize the effect of climate change on public health along with the environmental footprint of the health care sector and are calling on physicians to take climate action in their personal and professional lives,” Collins says. “Given the knowledge I have gained over the years, I feel deeply obligated to continue this satisfying work and am excited to inspire other physicians to do the same.”