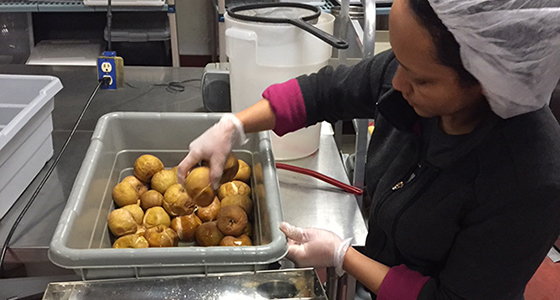 What do you do with 800 pounds of “ugly” apples? If you are Boston Children’s Hospital, you make applesauce and a partnership that benefits farmers, hospitals, food businesses and the planet. (CommonWealth Kitchen)

It was a brisk November morning in Boston. Fall had settled in - orange, yellow, and red leaves littered the ground, and the harvest season in New England was drawing to a close. Despite the time of year, CommonWealth Kitchen was buzzing with activity. Based in Boston’s Dorchester neighborhood, the organization’s commissary kitchen was busy working to extend the season for regionally-grown food by processing produce from New England farms into purees, sauces, and other food service items.

Shawn Goldrick and Michael Cogliandro from Boston Children’s Hospital, a Practice Greenhealth member, were touring the facility as part of the Nourished by New England program which connects health care with regional food producers. Commonwealth Kitchen’s Jen Faigel, the founder, and Mia Cellucci, the strategic partnerships and marketing manager, showed the team from Children’s a large bin of 800 pounds of “rescued” apples that came from New England farms that weren’t considered retail quality due to their appearance – often called seconds or “ugly fruit.”

Commonwealth hoped to process the apples into a useful product and find a market for it. This gave Cogliandro and Goldrick an idea - they already had an “apple a day” program at Children’s Hospital which provided complementary apples in their cafeterias - why not incorporate a co-branded applesauce into the program? From that idea, a new partnership was born – and 600 jars of rescued applesauce were made. 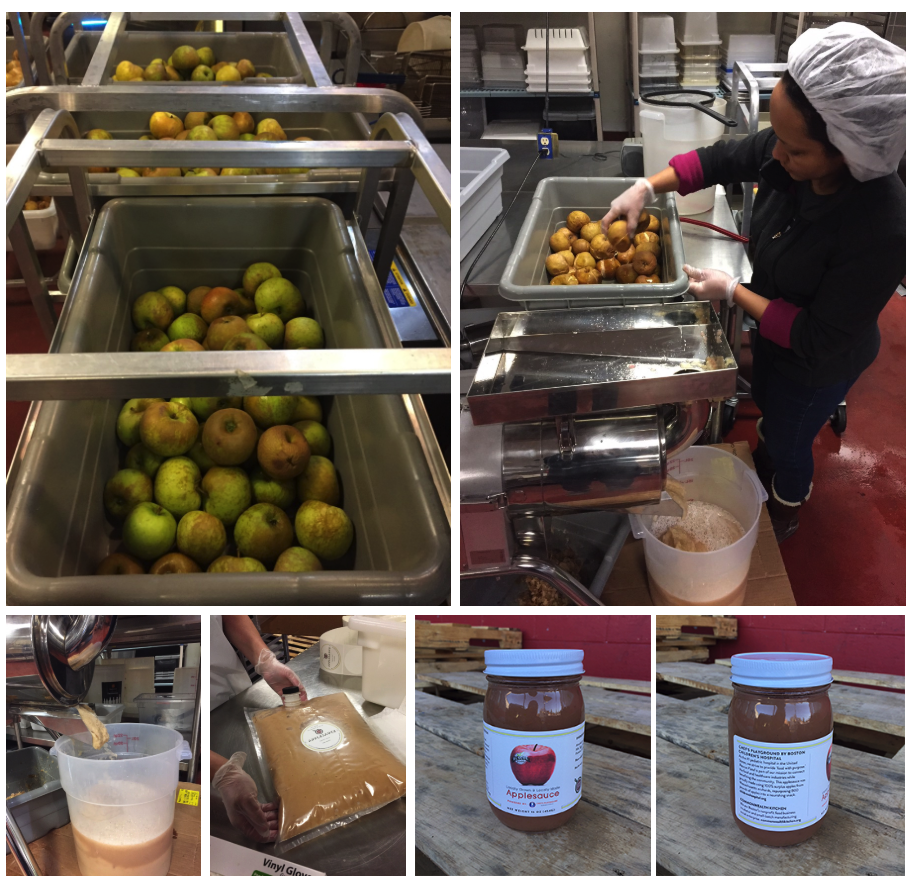 From apples to sauce... (CommonWealth Kitchen)

“I sell to many institutions such as hospitals, universities, and K-12 schools. Their business is very important to me. Commonwealth Kitchen has helped me to increase my institutional revenue and avoid food waste.”

Meanwhile, about 100 miles west in Hadley, Massachusetts, farmer Joe Czajkowski loaded his truck for his daily delivery to Boston. Freshly pulled carrots, ripe red apples, and hearty winter greens would soon be making their journey to kitchens across Boston. Lakeside Organics has been in Czajkowski’s family for 100 years and he has seen a lot of changes in agriculture, food markets, and regulations in his time as a farmer. 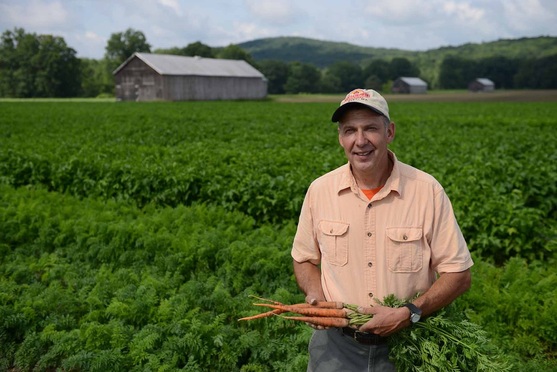 Even established farms, like Lakeside Organics which has been in Joe Czajkowski's family for 100 years, sometimes struggle to make ends meet. Partnerships with hospitals and food processors to rescue surplus food and create value-added products reduce waste and provide delicious local foods to serve to patrons (Richard Howard).

Even an established farm like his struggles at times to stay afloat so he frequently looks for new market opportunities. The latest is spiral cutting butternut squash into noodles for grocery stores and institutions. It was a great new value-added product for his farm but the process had a waste product – the squash end. Nearly 2,000 pounds of squash ends were ending up in the compost pile each week.

However, Joe’s squash ends were not going to waste. In fact, they were loaded onto his truck and heading to CommonWealth Kitchen, where they would be processed into a squash puree to be sold to institutions like universities and hospitals. This was one of many processing jobs that CommonWealth performs for farmers. Others include tomato sauces, pickles, and a variety of pestos.

“Children’s Hospital has been a tremendous partner. Shawn’s willingness to play such a strong leadership role and create so many great opportunities for CommonWealth Kitchen and our member companies to sell to a major institution like Children’s is a game-changer for us. It supports our mission to build a diverse local food economy, create quality jobs, and build a resilient food system. We’re thrilled to have them as a major partner, and are hugely grateful to the Health Care Without Harm team for making the introduction.”

This collaboration between a hospital and a nonprofit food business incubator creates multiple benefits that ripple across the community. Boston Children’s Hospital obtained healthy, locally produced items that met their specifications, farmers were able to earn income from their excess product, food was diverted from the waste stream, CommonWealth Kitchen earned income to support their work, Boston businesses sold products to a large institution, and Boston-based food production jobs were sustained.

The institutional market is crucial for CommonWealth and its member companies, according to a landscape analysis. Grocery stores can be a challenging market to enter because marketing is needed. Promotion is expensive, particularly for the largely under-resourced companies that CommonWealth hosts. Institutions, however, utilize a high volume of product on site and their values often align with those of CommonWealth - diversity in the supply chain, healthy food access, local sustainable job creation, and investing in the local economy, all of which address social and environmental determinants of health.

As a business incubator, CommonWealth Kitchen is home to over 50 small food businesses. The facility offers warehousing to its member companies in the form of dry storage, cold storage, and frozen storage. Commonwealth Kitchen’s shared commercial kitchen, storage, and cooking space combined with business and technical support, provides the essentials for their member companies to start and build viable food companies. Over 75 percent of these are owned by women, immigrants, and/or people of color. Through its work, CommonWealth employs nearly 150 people in one of Boston's lowest-income neighborhoods.

Pickling for the planet

Particularly when landfilled, food waste is a significant contributor to climate change because its decomposition produces methane, a potent greenhouse gas. According to the Food and Agriculture Organization, global food loss and waste generate 4.4 gigatons of carbon dioxide annually or about 8 percent of total greenhouse gas emissions. Food waste is the third largest contributor to climate change, according to Project DrawDown.

In 2017 CommonWealth processed 25 tons of farm surplus into 15,000 containers of pickles, sauces, pesto and similar products for a range sales outlets. In addition, they processed approximately 3 tons of surplus into applesauce and butternut squash puree for Children’s Hospital, Boston Public Schools, and area colleges.

According to the Watch My Waste calculator, the 28 tons of food waste rescued by CommonWealth saved the equivalent of emissions that would have been generated by a household’s electricity use for almost 12 years. Another calculator estimates that the benefit is the equivalent of taking 64 cars off the road.

The Children’s Hospital applesauce project helped to secure an emerging market for Commonwealth — produce seconds and farm surplus. Commonwealth Kitchen has seen increased interest from farmers and buyers alike for products made with produce seconds.

Learn how hospitals are reducing their food waste and GHG contributions.

Fruits (and veggies) of collaboration

The partnership between Children’s Hospital and CommonWealth only started with applesauce. The organizations meet quarterly to explore opportunities for Children’s Hospital to procure additional products from both CommonWealth’s commissary kitchen and their member companies. As a result of one of these meetings, Children’s Hospital replaced their 13-ingredient tomato sauce with Foss Sauce, a five-ingredient sauce produced by a CommonWealth member business. Children’s Hospital also sells the sauce in their gift shop and they featured Doug Foss and his sauce at one of their Chef’s Playground “Parent Night Out” dinners for parents of their long-term inpatients. These four-course, elegant meals, feature regional and sustainable ingredients and are designed to be a respite for parents dealing with the stress of a severely ill child. 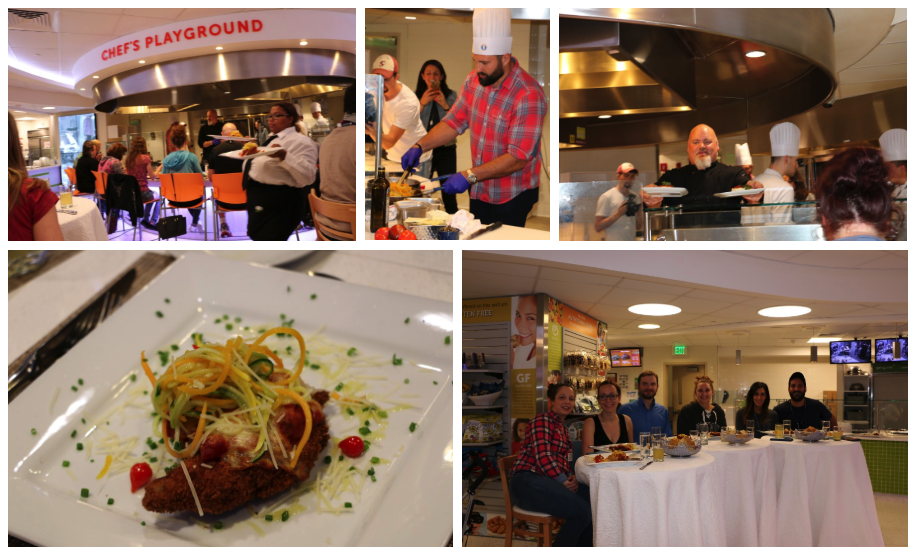 Boston Children's hosts “Parent Night Out” dinners for parents of their long-term inpatients. These four-course, elegant meals, feature regional and sustainable ingredients and are designed to be a respite for parents dealing with the stress of a severely ill child (Boston Children's Hospital).

Children’s Hospital continues to work with CommonWealth and is in discussions to bring in chutneys and relishes from member Lyndigo Spice, a company owned by Boston Police officer, Celeste Croxton-Tate. The hospital is also exploring utilizing farmer Joe Czajkowski’s squash for its upcoming fall recipes and muffins as well as eggplant “meatballs” produced in CommonWealth’s commissary kitchen.

“Our relationship with CommonWealth Kitchen has really helped us build strong ties to our local community. It's been great to support local companies by purchasing their products, and not only are we supporting local entrepreneurs, we are also providing a better product for our patients and their families from a health standpoint.”